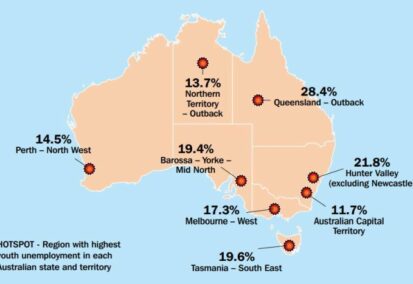 I was born in August of 1991. Plenty was happening in the world then, much as it is now. Countries were in the throes of political crises, new technological innovations were challenging the old ways of doing things and The Simpsons were on our TV screens. Unlike now, however, in 1991 Australia was emerging from the depths of a bitter recession, dubbed by our then Prime Minister Paul Keating as one the nation ‘had to have’.

In the prevailing 26 years or so, Australia has been the economic envy of most of the developed world for our unimpeded economic growth and ability to weather events such as the Global Financial Crisis. Despite this being a source of pride for our country, and at that top of any talking points from our treasurers (starting with likes of Paul Keating and Peter Costello and continuing today with Scott Morrison), it is readily apparent that not all Australians have prospered equally. While there are many ways we can measure inequality in our society, one of the most evident means is to see the disparity, in educational opportunities for Australia’s children.

Whilst we consider our education system to be relatively sound in a global context, “our level of disadvantage is both substantial and troubling,” as my fellow Alumnus Dan Hanrahan wrote in 2015. We need only consider this grave statistic from the Australian Council for Educational Research, who in 2016 concluded, “By age 15, students from the lowest socioeconomic households are on average almost three years behind students from the highest income households.”

In this era of alternative facts and fake news, however, it is important to ground such evidence in the real, lived experiences of the families and students who live in a low income context. Before proceeding, I want to stress that I don’t believe that disadvantage represents fault on the part of a community, school or family. Ultimately, it is not something a child chooses to be born into but rather something they experience. This was no more clearly taught to me than through my experiences of teaching in rural Victoria through the Teach For Australia Leadership Development Program in 2014 and 2015.

As I describe the town I taught in, I want you to think of whether you know of one that bears similarity to it. Maybe you grew up in such a town. Maybe it’s the town of your grandparents. Or maybe it’s just the town you stopped in on a long weekend road trip.

The town I called home for two years was blessed with natural beauty, 10,000 or so proud townspeople and a couple of cracking footy teams, one of which gave me a few games for some reason! However, it required over a four hour drive from a capital city to get there, only had two high schools and a few non-academic tertiary institutions available for study and was hampered by a lack of diverse job opportunities. Like many regional Australian centres, the town I called home was reliant on a couple of major industries, with its major manufacturing facility employing between five to ten per cent of the resident population. The town’s ongoing viability in an increasingly competitive global economy has only been secured through government financial assistance and the dogged determination of the citizens of the town yet it remains at the mercy of a foreign owner.

At the end of the day, this town could exist anywhere in Australia, such is the emerging city-country divide as escalated by forces of economic and cultural globalisation.

For the children of the parents who work in such industries and businesses, like the ones in the town I taught in, it is perfectly understandable why, for a child, the homework set in class may take second place to a discussion about where you might move should mum and dad lose their jobs. And whilst the internet may offer a glimpse into an array of potential post-school pathways, it is only natural for a kid to be informed by their immediate surroundings. In any Australian community, children look to the workplaces of their parents and family friends and understandably question the relevance of the lesson in front of them at the time.

However, the economic forces at play put our students under greater pressure than ever. As globalisation and technological advancement continue unabated, many of the jobs of our parents’ generation will no longer exist in the coming decades. As the Committee for Economic Development of Australia reported in 2015, “Up to five million [Australian] jobs are likely to be automated by 2030.” In order to find work, students will increasingly need to pursue further education after high school which puts further strains on family budgets and the cohesion of rural and remote communities as relocation to the city for further studies is necessitated.

It’s not as though we’ve got time to contemplate our solutions to these existential problems. Already, youth unemployment in Australia is on the rise (it’s currently at 13.3 per cent) and is particularly hurting communities already suffering economically.

And this is all without Australia suffering a recession for over a quarter century. As our housing market continues to get squeezed and debates on electricity prices rage, the tipping point may be sooner rather than later. If and when our economic bubble bursts, these ominous trends will only escalate and amplify to affect more of our fellow citizens, particularly our students.

Ultimately, while research, analysis and policymaking may enlighten us to the great social, political and economic challenges of our time, it is only through innovation in education that we can hope to make a difference for the students of Australia. As they enter an uncertain educational and workplace future, it is their teachers who can make an immense difference.

1991 seems to have been a fortunate time to be born in Australia. In the intervening 26 years, Australia, on the whole, has prospered as a nation unlike many others. In another 26 years’ time, Australia and the world will undoubtedly be a vastly different place. Better in some ways and potentially worse in others. Let us ensure that in that time, we have made a meaningful difference for our students in addressing this great economic and social challenge.