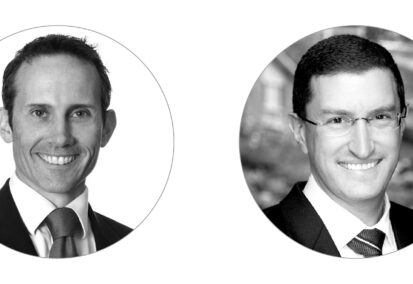 An interview with Teach For Australia Ambassadors, The Hon Dr Andrew Leigh MP and Julian Leeser MP. This story was featured in our inaugural edition of STORIES.

Andrew Leigh is a lawyer turned economist turned politician. A member of the Labor party, Andrew is the Shadow Assistant Treasurer and Federal Member for Fenner in the Australian Capital Territory.

Julian Leeser is a member of the Liberal party, the Federal Member for Berowra in New South Wales and a former Board Member of Teach For Australia.

What motivated you to get involved with politics?

JULIAN: I wanted to be a parliamentarian since I was 10 years old. I completed a school project on Australian Prime Ministers and became aware of the impact that you can have on the country, and the difference you can make through service in parliament.

ANDREW: I’ve always been interested in social justice and making a difference in my community. But I recall the day I realised I wanted to do something in politics. In June 1998, I flew out of Australia to work in London—I had no job to go to and not much in the way of savings to support me. Tony Blair’s government had been elected the previous year, and British Labor was doing exciting things under the rubric of the Third Way. It seemed to be worth taking a chance to secure an interesting opportunity.

In the end, things worked out. I sent about 50 letters to Labor members of parliament, some of whom agreed to meet up for a cup of tea. I spent a few weeks working for the fabulously eccentric Fiona Mactaggart MP, and for Australian expatriate Ross Cranston MP. By Christmas, I was back in Australia, but the experience helped shape me, and I’m glad I took that risk.

What does a day-in-the-life of a politician look like?

JULIAN: There are two aspects to being a parliamentarian. Working in my electorate during non-sitting weeks, I spend my time seeing constituents to understand the challenges they face. I address local community groups, I visit people and organisations, I interact with the local Liberal party in my area and attend branch meetings. I also do parliamentary committee work and speak to the media on issues of importance to me.

ANDREW: I work on a wide range of constituent issues, for example, discussing housing affordability challenges and access to the National Disability Insurance Scheme. As a part of the Labor team I have a responsibility to develop economic policies, assisting Chris Bowen (Shadow Treasurer) and Bill Shorten (Opposition Leader) on issues such as tax, competition, productivity, inequality and charities. Sounds like a big portfolio! (laughs) Yes, I’m fortunate to have a range
of responsibilities in my role.

What are the most significant decisions you had to make to be in the position you’re in today?

JULIAN: I think committing the time to get involved in politics in the first place. I was a member of the Liberal party for 26 years before becoming an MP. I was particularly active in the last 10 years, where I spent a lot of time on political activity. I was also on 17 different boards and committees, panels including Board of TFA. So there is a large sacrifice of time while being involved in politics.

ANDREW: I’m lucky to have the support of a loving family willing to see me work in politics. There are significant stresses on people who are supporting members of parliament and my wife does more than her fair share of looking after our three wonderful boys and managing the household. I’ve found this to be the most diverse and interesting job I’ve ever done. The opportunity to both make a difference in your neighbourhood but also to contribute to policy decisions that might shape the nations future – that’s all pretty exciting.

What is the most challenging aspect of your role as a member of the House of Representatives?

JULIAN: I think knowing when to speak out on something and when to hold fire. If you speak out on everything all the time – people won’t pay attention to you. It’s important to know what your priorities are. The other challenging aspect is time management as there are a million things you can do. Organising your time so that you’re getting the best value for your constituents and serving them is incredibly important.

ANDREW: In a world of partisanship, working out ways to disagree without being disagreeable is the central challenge of modern politics. I think we all work at maintaining that balance. Politics is inherently partisan in Australia and the two party system provides a valuable frame through which ideological questions can be debated – but we do know that the gap between parties is rising in Australia, as it is in the US and the UK. It’s important that we see our opponents as being people of good will who simply think differently from us.

In your opinion, how can teachers in the classroom influence education policy decisions without being a politician themselves?

There are many ways that this can be done: first be an innovator and demonstrate through innovation and evaluation the success of something that you want to see turned into a broader program. Provide evidence of what works and show the policy maker what you’ve done and how it can make a difference.

Try and get a member of parliament (write to them) to visit you in the classroom to see what you do. Everyone has an interest in education policy but as Glyn Davis (Vice Chancellor of the University of Melbourne) once said – all education policy is biography. Because we all went to school, everyone thinks they know how it should be done but education is actually more complex.

ANDREW: Well, a huge amount of education policy is made within the education departments in schools. The evidence in education is shaped by practitioners and people in the industry. When I was studying at Harvard, I was influenced by Ronald A. Heifetz’s notion of adaptive leadership and Heifetz makes the point that, too often we look to authority figures to make big political decisions and often leadership is something that can be exercised at a more grass roots level.

If someone wanted to influence you or your colleagues, what is the best way to do that?

JULIAN: I try to read as much as possible: newspapers, political journals, and policy digests. Some constituents will seek me out personally. I’ve found the most effective people are the ones that can give me an experience of seeing something in action. It’s really great if you can provide parliamentarians an opportunity to experience something, not just turn up at a meeting.

ANDREW: There’s no single ‘best way’. There’s a plethora of sources we derive our information from. I think it’s important for anyone looking to influence policy to recognise the environment that the politician is operating in. Don’t be immediately offended if the person you suggest an idea to doesn’t respond and tell you it’s the most brilliant idea they’ve ever come across. The time might not be right, but if we deal with the person with respect and keep the lines of communication open, the idea may be implemented at a later stage.

What are your views on partisanship?

JULIAN: I think there’s not enough people involved in politics – I don’t care what party people pick. Pick the one that aligns with your values. Go and see your local branch and get involved.

Our parliament is only as strong as the ones that are choosing our parliamentarians and we need to get the right people into Parliament.

I also think Teach For Australia gives people a real advantage. The skills you develop as a teacher, the organisational, communication, motivation and discipline-knowledge you bring, and the brand of excellence Teach For Australia will equip you well for a whole range of careers.

What advice do you have for our Alumni and Associates who want to pursue a career in politics?

JULIAN: Get the best education you possibly can – consider post graduate education. Consider living and working overseas for an extended period. Make an effort to build a diverse portfolio career that equips you with knowledge of a range of different industries and occupations. One of the things you’ll find as a parliamentarian is that you’re expected to know a lot about a lot of different areas. Bring to the table your practical experience in a wide range of topics and this will be a huge advantage for you. Finally, if you want to be a lower house MP, know your community and be committed to its advancement.

ANDREW: For young leaders, there are three pieces of advice I’d offer. Do what you love, recognise that luck will buffet your career, and be a bit unreasonable. I don’t advise anyone to shape a career with the aim of ending up in parliament. Leaders are found in all walks of life. By all means, bear politics in mind when you’re deciding whether to join a political party, what to study, and what jobs to apply for. But, a career focused solely around the goal of winning a spot in parliament is likely to be a fragile one. Remember rule number one: it’s better to do something you love.