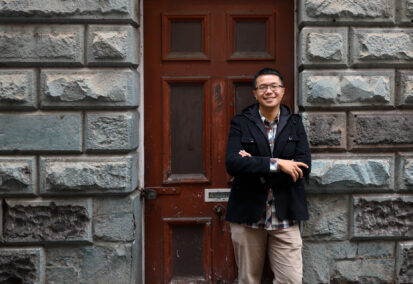 Teach For Australia Alumnus Stanley Wang (Cohort 2012) has taken his leadership talents to Taiwan, where he was recently appointed as Chief Executive Officer of Teach For Taiwan.

Stanley Wang finds himself straddling two worlds. In Taiwan, where he has returned to live since August 2018, he is considered Australian; in Australia, where he lived for two decades, he was often seen as “Taiwanese,” or simply “Asian”. While the softly spoken Alum carries a burden of otherness in two countries, there’s no question that he’s a leader and changemaker whether here in Australia, or in Taiwan.

“I was born in Taipei, but I spent my childhood in a city 90 kilometres south of Taipei called Hsinchu, where most of the big Taiwanese tech firms like Acer, Asus – all the Taiwanese brands people know – are based. So even though I am based in Taipei now, I actually have no childhood memory of the city. My family moved to Australia when I was 10, so if I had to choose, I’d say Melbourne really still feels like home,” Stanley said.

“You know, sometimes in Australia, people seem more sure about my cultural identity than me, which can feel both inclusive and exclusive at the same time. I had romanticised a little that by re-engaging with the society where I am part of the ethnic and cultural majority, I’d be able to leave these bicultural challenges behind.

“But funny though, now, when I am in Taiwan talking about something like leadership development, people think straight away that I’m Australian. Maybe it’s because of the way I structure my arguments, or the way I interpret the concept of leadership… I’m often reminded by moments like these that if you manage your bi-cultural identity well, it can be a great asset; if you don’t, you could be in crisis mode in both worlds.”

Stanley took on the reins as Teach For Taiwan’s new Chief Executive Officer in the middle of 2019, having been at the organisation for 12 months in a strategy role. Teach For Taiwan’s founder and former Chief Executive Officer, Anting Liu, was juggling two roles as Chair of the Board and CEO, and hand-picked Stanley as her replacement so she could focus on the board role.

The two had initially met in 2014 when Stanley reached out to offer his support to the newly founded organisation that was focused on tackling educational inequity in the country of his birth. Stanley had just completed three years at his placement school, Charles La Trobe College, in Melbourne’s northern suburbs, and was considering a career move. Anting commissioned Stanley to write the Teaching As Leadership course for Cohort One of Teach For Taiwan, and while Stanley considered joining the fledgling organisation on an ongoing basis, the timing just wasn’t right.

“In 2014, I was actually quite keen to join Anting in Taiwan, but I was also a passionate linguist, and Haileybury College gave me an offer to be the Head of Languages,” Stanley recalled.

“I had never imagined that a top-tier independent school would be willing to consider a 27-year-old for a Head of Department role. It was the largest team in Australia in language teaching; when I entered I was responsible for 34 staff across 3 sites, and when I left, I was leading a team of 78 across 12 sites.”

Stanley was rightly excited by the offer from Haileybury and said to Anting that without significant professional experience in leadership, what he was able to offer Teach For Taiwan’s leadership development program would very much be a band-aid approach, primarily translating a lot of things learned during his time as a Teach For Australia Associate and localising it in a way that was meaningful for the Taiwanese context.

“I said to Anting that the opportunity at Haileybury where I got to actually lead a big department was a really good way of investing in myself and developing my own leadership, which I thought was an essential next step before considering a senior management role,” Stanley said.

He took on the Haileybury role for three years but inevitably the pull of the Taiwanese opportunity grew too strong and Stanley moved to Taipei in 2018. Anting and Stanley have big plans for the organisation. It employs 45 people and there is an intention to grow it to more than 50 this year. Teach For Taiwan’s sixth cohort of 49 Fellows began delivering classes in six of Taiwan’s 21 counties in September this year, a marked increase from the 29-strong cohort of the previous year, and plans are in place to drive continued growth.

“Within each county classified by us as high-demand areas, there is still a lot of room for development, a lot of room for growth. In fact, a lot of the more open and progressive principals approach us, work with us for a year, and spread the word, really leveraging their networks to try and get other schools involved,” Stanley said.

There are of course challenges, the primary one being that Teach For Taiwan is an NGO, and the Taiwanese public tends not to see NGO work as a valid career option. As a result, creating a talent pipeline for TFT’s staff team and persuading parents to allow their children to join the Fellowship is one of the biggest hurdles for TFT’s Fellows, recruiters and HR.

Stanley said that the nation’s aging and shrinking population also means there is little demand for new teachers, and there is little incentive for teachers to consider teaching in non-urban areas. So to see such rapid growth in a short period of time is testament to Stanley and Anting’s leadership and suggests a positive future for the organisation.

“We are in a similar boat to Japan and Korea in that we also have a severe declining birth rate. It’s actually quite sad to see. I used to walk into my primary school classroom and there were 40 of us in the room. These days there are plenty of classrooms with only five kids, or eight kids. While there’s an oversupply of teachers they’re not going to the right places, leaving us to fill the gaps for schools that are struggling to find teachers. Having said that, Anting and I strongly believe that the best innovation comes from the fringes, so these classrooms are actually some of the best places for training future leaders,” he said.

“For me, the two years in the Teach For Australia program showed me that when you have strong leadership skills, the ability to combine them with your specialisation, and the opportunity to apply the by-product in context to meet the needs of the community and the students, the result can be quite powerful indeed.”