On Country with New Friends 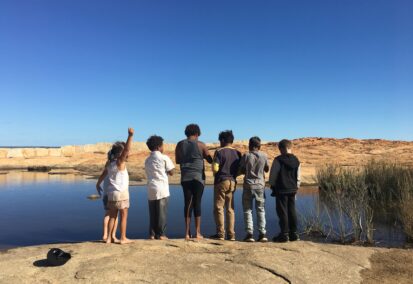 Earlier this month, the Nutha Way program took a group of young people from Coolgardie for an on country experience at a local special site. Along for the learning experience were Teach For Australia staff and teachers from the Kalgoorlie-Boulder region.

Burra Rock is a special place; an old place with cultural value and history.

It’s a bold granite outcrop surrounded by woodlands recognised internationally for its biodiversity, about an hour’s drive south of Coolgardie, in Western Australia’s Goldfields. A few relics of bush industry 100 years ago remain, but today Burra Rock is part of a Conservation Park and the Indigenous traditional owners are recognised as the custodians of the land. And it is here that a group of Coolgardie youngsters and members of Teach For Australia’s (TFA) Kalgoorlie community found themselves learning together on the first weekend in November.

The activity was part of the Nutha Way program which is
supported by Millennium Kids,
an inspiring not-for-profit organisation which has an enthusiastic board of
10-24 year olds at the helm.

Millennium Kids CEO Catrina Luz Aniere said the Nutha Way
program aimed to build positive relationships in the community through youth-led
strategies for change: “The kids from Coolgardie love going on country,
learning about their culture and the history of the woodland, the largest
intact temperate Mediterranean woodland left in the world.”

As well as climbing the rock, marvelling at the immense views and examining the new growth in previously burnt areas of the woodland, the group found the dam at Burra Rock to be a fabulous place for swimming on a hot day.

“A part of going on country is learning about their
responsibility as custodians,” Catrina said. “At the dam they noted 4×4
vehicles had been out onto the rocks and up into the dam area. The kids want to
protect the area for future generations so they report any vandalism or any
interesting observations they make on the day to local authorities.”

The Coolgardie kids were also keen to show the visitors a
malleefowl nest, so on the way home the bus detoured to a large nest in a
previously burnt area. The kids will monitor the nest for any activity over the
next few years, as the bush recovers.

Jackie Drake is TFA’s Teaching and Leadership Adviser for the Kalgoorlie-Esperance region. She’s also a volunteer with Millennium Kid’s Nutha Way program. With Jackie’s encouragement, 10 TFA Associates and Alumni have also volunteered with the program since 2019.

“I have lived and taught in Kalgoorlie since 2006 and deeply value the opportunity to volunteer as a mentor with Nutha Way. I have seen the Coolgardie Kids grow over the last few years through the books of their artwork they have published about their country and the plants and animals that surround them.

“Nutha Way is providing a positive environment for strong,
meaningful relationships to develop between the young people and elders in
Coolgardie and teachers from local schools.

“Enjoying their country together – outside the classroom –
allows the young people to have autonomy over their learning.”

Cat has been learning alongside Elders since her first experience as a teacher in the Pilbara in the 1980’s. “There is a rich history we can explore and learn about together, alongside a culture that has thrived on this land for thousands and thousands of years. These on country experiences enrich our lives as teachers and gives the opportunity for children in the program to see people engaged in learning about their culture.”