Students take on a different kind of sport 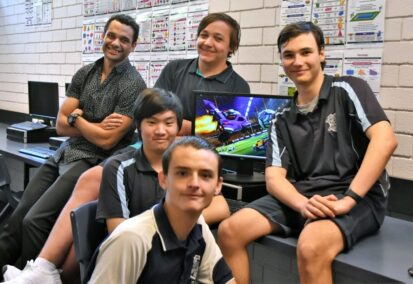 More often than not, when you hear the word “esports” you might question what exactly that is – however for students at Southern River College on the outskirts of Perth, esports is ingrained into the school community.

Electronic sports, also known as esports, date back to the late nineties but in the past few years it has been officially named as a sport.

Mr Filer, as he is known to his students, is a keen gamer and jumped at the opportunity to guide his students into the esports realm.

Typically the team is open for Year 11 and 12 students to join, however this year saw the introduction of Year 10 student, Jamie Harris into the team.

“Mr Filer had come along and picked up the opportunity to be able to run the esports competition through our school. It had come through the daily notices and Rocket League is a game that I am really passionate about,” Jamie said when looking back on joining the team.

Jamie had been playing esports game, Rocket League, for the past three years and when the daily notices at school came around looking for players, he was excited by the prospect of joining the team.

“I jumped at the opportunity to be able to join the esports team as the youngest player, with the rest of the team being in Year 12.”

Being the youngest member of the team came with its challenges as Jamie soon found out.

After overcoming his nerves, Jamie fitted into the side seamlessly and with his help, the team made it all the way through to the state final.

“It was great, we won the final at the Escape Portal (an esports venue in Perth) in overtime and I even scored the winning goal,” Jamie said.

Now that the season is over and Southern River Colleges’ Year 12 students are graduating at the end of the year, Jamie has been made captain for the team next year.

The captaincy comes with a lot more responsibility, which Jamie is looking forward to taking on.

“It’s going to be a lot more effort from me next year but I’m really looking forward to the extra responsibility,” said Jamie.

Jamie has his eyes set on lofty ambitions for the team next year.

“This year we won the WA title but then lost to Queensland in the national competition – which meant we didn’t get to go to the esports open in Melbourne. So I’m really aiming for us to make it Melbourne to compete on the big stage,” Jamie said.