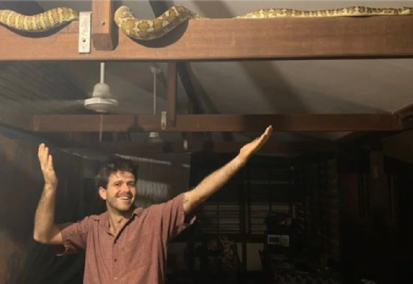 Nothing says you’re living in the Northern Territory like a run-in with the local wildlife.

In the Top End Teach For Australia teachers report encounters with frogs, lizards and flies in the classroom.

There’s always plenty of roos around and there is of course lots of great fishing on offer too.

Occasionally there’s even a need to keep a watching eye on a waterhole for crocs.

For Teach For Australia Associate Sayle Johnston (Cohort 2019) coming face-to-face with a lanky local was a little too close to home.

Sayle was placed at Haileybury Rendall School in the second year of the Leadership Development Program.

He was home one night this week working away on his Masters coursework in the bedroom of his Coconut Grove home when he discovered he had company in the form of a 3m-long python draped across the ceiling rafters above his desk.

Being late at night, and clearly not one to panic, Sayle and his roommate decided to take a few photos. They figured that a call to the local snake catcher could wait until the next day.

The duo stayed elsewhere for the night, only to find the slippery house-sitter missing when they returned in the morning.

Sayle, who comes from Victoria, has clearly adapted to life in the tropics.

Here’s proof: he did what all good Territorians do and phoned the encounter into the NT News, which famously loves to run a good animal story.

Sayle found himself pictured in the paper in an article colourfully titled:

“‘This f*cking huge snake was in my room, and I was right underneath it’: Darwin man shocked to find 3m python hanging from bedroom rafters”

TFA’s Territory Manager Amy Sharp spotted the story and instantly recognised the house – and the bedroom – as one she’d lived in 15 years before.

“At the time I was even teaching at the school Sayle is placed at. It was called Kormilda College back then, now it’s Haileybury Rendall,” Amy said.

In the NT News article Sayle reports that while he hasn’t seen the snake since that fateful evening he has been hearing plenty of little noises around the house.

In bad news for Sayle, Amy said that the snake had also visited her when she was resident at the house.

“It seems to have grown slightly,” Amy said, with just the hint of a grin.