What did being On Country teach our Associates? 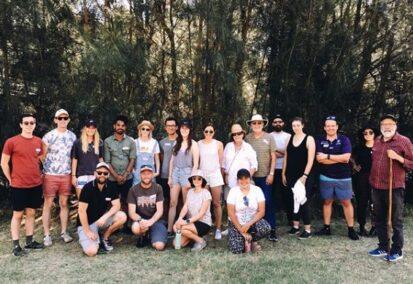 On a beautiful Kambarang day (the Noongar season described as warm, dry and full of colour), a group of 19 Teach For Australia Associates, staff and friends joined Professor Simon Forrest for an enriching On Country experience.

Forrest, Curtin University’s Elder in Residence, is Western Australia’s longest serving Aboriginal academic. One of his specialties is field trips designed to educate people on Aboriginal, and specifically Noongar, ways of knowing. Many of the participants on the day had attended a previous trip to the site of the Pinjarra Massacre in 2018.

The purpose of the trip was to learn about the life and times of Yagan, the Noongar leader and resistance fighter who came to prominence during the early years of the Swan River Colony.

Yagan is memorialised in two prominent statues in Perth City so today was a great opportunity to learn more about who he was. During the day, we travelled to important sites in Yagan’s life including his birthplace in the vicinity of Wireless Hill and the memorial in the Swan Valley where he is buried.

Following his capture and imprisonment on Carnac Island near Fremantle in 1832, Yagan eluded police for many months before he was captured and killed.

Just as fascinating and important as his life is the efforts taken to repatriate Yagan’s head, which was removed from his body and sent to Britain in 1833. In 1997, his head was returned and buried. This was a deeply significant moment for the Noongar people.

Across the day, we were fortunate enough to visit many other sites significant to Noongar people and to Forrest’s family. One of these sites represents one of the oldest archaeological discoveries recorded anywhere on Earth, proving 38,000 years of Aboriginal habitation. Incredibly, this site lies meters from one of Perth’s busiest intersections.

This was a theme throughout the day – as teachers we were amazed to learn about the rich heritage that lies on our doorstep that has not been adequately signed or identified. Without the knowledge that we were privileged to obtain today, we would know nothing about these places.

The day finished with a sharing circle which highlighted the commitment of participants to do something with today’s experience. For many of us, this commitment is about shaping young minds to acknowledge and celebrate Aboriginal culture and knowledge.

On behalf of Teach For Australia, I thank Professor Simon Forrest for a thoroughly stimulating and invigorating experience.