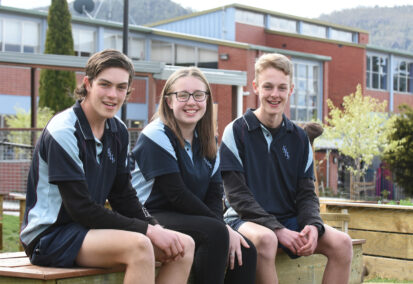 It’s a Friday afternoon at New Norfolk High School and some students are working outside. The cold and wet drizzle of winter doesn’t perturb the young Tasmanians. They’re working on a garden shed, lining its walls with plywood to make it look tidier.

Indoors, another batch of students are cooking with seasonal ingredients – a springtime pasta with homemade ricotta. There are fifty students taking “Kitchen Garden,” which is now in its third year. Madeleine Brodie (Cohort 2017) established the program in her first year at the school, with plenty of hard work, dedication and collaborative planning alongside the support of the school and Principal Adam Potito. In 2018, the class has expanded to have three teachers, with the addition of Katerina Newfield (Cohort 2018) and Principal Adam Potito.

Ms. Brodie and Mr. Potito run the outdoor Garden side of the class. Given the program is relatively new to the school, students have been involved from the ground up – which included building the infrastructure for the garden. In the first year, they built raised garden beds in a disused area between school buildings, then planted winter crops and an herb garden. Ms. Brodie received one of five Teach For Australia Community Fund grants to expand the program in 2018. Kitchen Garden allows students to work on various projects and play to their strengths and interests through working groups, such as building, organisational, gardening and cooking teams. A rotating roster places students within each of the teams for five weeks, and then they can decide to either continue working in the same team for the remainder of the term, or try out a different project. “Year 9 students lead each of these teams,” Ms. Brodie says. “They take responsibility for running some activities and assisting younger students.”

Victoria, Lane, Tyler and Josh are the Year 9 leaders for the two build teams, which this year were tasked with re-modelling the shed and building glasshouse boxes as well as a workbench.

“I wanted to get started right away as soon as I heard the class was hands-on,” Josh says. “We had to build supports for a bench, and cut the timber for it. We learned how to measure, cut and place together all the pieces like a puzzle.” Victoria was drawn to the program because it takes place outdoors – not a common locale for class. “My favourite project this year would have to be redoing the inside of our garden shed including paneling all the walls,” she says. Through the project, “I learnt how to overcome challenges, how to use some power tools and also how to build things from scratch.”

Clearly, it’s a holistic class. Through Kitchen Garden, students develop an awareness of the environment, increase their physical activity, and improve their food comsumption and sustainability practices. They also gain insight into vocational and tertiary education pathways, and grow their self-esteem, independence, respect, collaboration and leadership skills.

It’s always exciting to go to Kitchen Garden, according to Tyler, who otherwise likes to play Xbox and hang out with his brothers. While rebuilding the shed, he learned how to panel walls and build the structure “pretty much from scratch, and with recycled materials.” Learning to use the materials – with a focus on what you already have on hand – is an important skill, Tyler says.

Lane admits that his “number one” class at school is Kitchen Garden: “The class is full of amazing people that all get along real well with each other.” While building the garden shed with his mates, he says he learned “how to adapt to and overcome problems.” “It’s about learning how to work as a team,” Victoria says. “I learned how to sort out issues and how to work with different people than usual.”

Josh, who is looking forward to “getting a decent job and settling down” after he finishes high school, has found that “the most interesting thing I’ve learned this year is learning how to work as a team. We produced some great work.”

“Victoria, Lane, Tyler and Josh are some of our most dedicated students,” Ms. Brodie says. “From the get-go, they jumped into working on their projects, often for much longer than class time, with passion, enthusiasm and drive. They work both independently and patiently assisting other students.”

Each season brings a fresh batch of projects, and winter is no time for a break from the garden. Students spent the recent season planting and harvesting winter crops, building seven new garden beds, redesigning the shed, and making glasshouse boxes for raising seedlings.

The Kitchen side of the program, run by fellow Associate Katerina Newfield, is made up of a cooking team of about twenty students. They prepare meals with the crops their peers have grown outside.

During winter, that means using lots of greens and brassicas. Students recently made a beef strip salad with sautéed winter greens.

“Everything but the beef and the tomatoes came from our garden,” Ms. Newfield says. Last spring, they had “a huge crop of snow peas and have planted everything from raspberry canes, to potatoes, to garlic. The most exciting thing we have planted [last year] is an orchard of twenty different varieties of Tasmanian heirloom apples which should fruit come Autumn this year.”

“Winter has also been a great time to start collecting resources and making plans for our spring planting, and getting some of the longer growing crops like garlic in,” Ms. Brodie says. “You have to start surprisingly early to raise seeds for spring.”

The warmer months bring with them the prospect of exciting harvests and creative meals.

In the kitchen, Ms. Newfield says, “we are hoping to do some invention challenges, where students are provided with a selection of ingredients and need to create their own dish from these. We would also like to do a ‘variety veg’ activity where we can show off some of the less-familiar vegetables such as lotus root, okra, winter melons and bitter melons, durian and jackfruit.”

At the end of last year, New Norfolk High School hosted an International Food Fair, for which the students prepared early by collecting jars: around that time, the program hoped to “receive some large, locally grown, excess stock of berries and tomatoes which we would like to preserve and sell,” Ms. Newfield says. Planning for a school fair involves preparing preserves, seedlings, beeswax wrap – and even a student-led food truck.

In the garden, there is always lots of planting and harvesting. Once the current build projects are finished, the students will start putting composting and waste management systems in place, and perhaps build an herb spiral.

Your Time Starts Now: Australia has one of the most unequal and inequitable education systems in the developed world – but you can help make a difference. We’re looking for smart and passionate people like you to commit to teaching for at least two years at a school that needs you. You’ll teach what you know, and be a role model for young people. It’ll be tough, but one of the most fulfilling times of your life. Start your application today.