Learn about the regions and communities that we work with, and hear stories from the field

Our work and impact

Teach For Australia’s story started in Victoria; the first placement state for our Leadership Development Program.

Teach For Australia in Victoria

The educational gap between schools in Victoria has been widening over the past decade.

Research from the Centre For Policy Development (CPD) in 2019 found that schools which are ranked as educationally advantaged have either maintained or increased their academic profile, whereas schools that are experiencing inequity have seen declining academic levels. COVID-19 has only exacerbated these problems, with estimates showing that the achievement gap has tripled in 2020 for students who are experiencing disadvantage

Where you live, and how far you live from a major city, can affect your education in Victoria.

Only 1 in 3 rural schools are able to offer advanced mathematics in Victoria, compared to 2 in 3 public metropolitan schools according to the Committee for Economic Development in Australia (CEDA) (2018).

And although the state is not large compared to other Australian states, the CPD also found that distance matters: the further you live from a major city, the less likely you are to achieve a VCE score over 40.

Victoria is a great place to teach, to lead, and to live

The state offers excellent opportunities to make a difference in the classroom from day one, while you enjoy connecting to your community, working alongside new colleagues and enjoying a lifestyle change the envy of many.

Teach For Australia partners with schools right across Victoria. So whether you’re after a tree change or a sea change, want to raise your family on a big block of flat land, have a hunkering for the hills, or you’re keen to really connect with a small (or large) community, then choosing a Victorian placement with Teach For Australia is the key to unlocking a satisfying career and a great standard of living.

Associates are often co-located at the same school, or work close to other members of the TFA family, meaning car-pooling is frequently an option. That means you can connect with your TFA colleagues, go over the day, chat about what worked and didn’t work in the classroom, and of course plan epic weekend getaways.

While car-pooling with TFA colleagues has many benefits, country commutes are often shorter than in the big smoke, so thank goodness Victorian country town cafes and bakeries often offer great coffee and big brekkies because you’ll have time for both before the school day starts.

In school, you might be inspired to start programs for the performing arts, or support student groups to enhance opportunities for their learning and leadership. You could find yourself helping out or heading up environmental programs, coaching sports teams or learning about Country, while on Country.

Victoria might be one of the smaller of Australia’s states and territories but it is bursting with opportunities. Make it your choice.

Download the 2021 Teach in Victoria: Guide to Victorian Placement Opportunities.

Teach For Australia places Associates in regional cities and regional towns in each of the Victorian Department of Education and Training (DET) regional areas:

As well as in the broader Melbourne Metro area which takes in all of Melbourne’s DET regions.

Every year we place Associates in regional cities and nearby towns right across Victoria.

Every year we place Associates in regional cities and nearby towns right across Victoria. These placements provide a great mix of country living, access to beautiful natural settings and outdoor recreational pursuits. A number of these regional cities have thriving Alumni communities as Associates have chosen to remain after completing the Leadership Development Program and as more Alumni have moved to the region. We also place in a number of schools in towns surrounding each regional city.

Many Associates choose to live in these towns so they can become part of their local community; others choose to base themselves in the regional city, with a daily commute of up to two hours (return). Examples of regional cities and their surrounds where Associates could be placed include Bendigo, Geelong, Horsham, Mildura, Shepparton and Warrnambool. Working and living in these regional communities provides you with the opportunity to see what educational inequity looks like first-hand.

We work with a number of schools that are more than 60 minutes away from a regional city.

We work with a number of schools that are more than 60 minutes away from a regional city. These schools are spread right across Victoria in towns of all sizes (populations range from less than 100 up to 10,000). Examples of the regions of Victoria where you could be placed include the South-West Coast, the Mallee, High Country and East Gippsland.

Schools in these regions vary greatly in their size and community need, with lack of access to opportunities being a significant common issue for all students. Associates placed in these schools become part of the local community, joining local recreation clubs and groups. They get to know their students and their parents as wider community members, beyond the walls of their classrooms. While these placements can be challenging due to their isolated locations, the opportunity to have impact and to develop as a teacher and leader is significant.

We partner with a number of schools in the Melbourne metropolitan area, and surrounding suburbs.

We partner with a number of schools in the Melbourne metropolitan area, and surrounding suburbs. With a population of five million, long commutes are to be expected in Melbourne, with many schools not easily accessible via public transport. A placement in Melbourne could see you teaching out towards Hoppers Crossing and Melton in the west, Craigieburn and Whittlesea in the north, Narre Warren in the south–east or along the Mornington Peninsula to the south.

Many Associates placed in Melbourne work in multi-cultural schools with a high proportion of students from recent migrant families. Working in these schools gives Associates the opportunity to access everything Melbourne has to offer.

A snapshot of opportunities in some of Victoria’s regional centres.

The South-Western Victoria placement region takes in a huge part of the state and includes cities and towns as far afield as Geelong in the east and Warracknabeal in the Wimmera.

Along the coast, the regional cities of Warrnambool and Portland offer plenty of recreation including surfing, fishing, camping, hiking and more. Further north, you’ll find plenty to do and see in Ballarat, Ararat, Stawell and Horsham.

Horsham is a particularly strong centre for Teach For Australia, with Horsham College hosting Associates yearly since the Leadership Development Program commenced in 2010. A number of the school’s mentors came through the program. This, plus great support from school leadership and the wider Teach For Australia community makes Horsham a smart choice for those looking for a lifestyle change in Victoria’s west.

The Loddon Campaspe area takes in the centres of Echuca on the Murray River, south to the goldfields area on the northern fringe of Melbourne.

The township of Maryborough, with a population of nearly 8000, punches well above its weight in terms of 1800s era history and things to see and do. The Maryborough Education Centre has been hosting Associates for the last several years, allowing for the development of a thriving network of dedicated educators.

The north-eastern region’s mountains, valleys, rivers and national parks provide endless scope for enjoying life when the school day ends. Population centres such as Seymour, Euroa and Wangaratta are dotted along the Hume Highway, while Wodonga and a number of other centres sit along the banks of the Murray River. High Country centres such as Bright and Mansfield offer the ultimate in tree-change opportunities.

The Goulburn region is one of Victoria’s main food bowls. The heart of the district is the rural centre of Shepparton, where Teach For Australia has been working for several years. A newly merged ‘mega’ school promises significant educational change for the young people of Greater Shepparton. Associates have the opportunity to make big impacts in this evolving environment.

Associates living in river cities, rural townships and agricultural centres right around Victoria have traded in their ‘big city’ commutes for easy living.

Echuca, located in the Loddon Campaspe area, sits on the NSW border opposite its twin city, Moama,  and is symbolic of the sort of lifestyle change that Victorian regional living affords TFA Associates. The Murray River town is located near the edge of the north-east DET region, and boasts activities such as paddlesteamers, golf courses, wineries, world-class water skiing and major skiing events such as the Southern 80; the biggest water ski race in the world. The Murray River is central to life in Echuca, helping to turn the city into a powerhouse of regional commerce following white settlement.

The Gippsland coast, growing regional cities and rural hamlets provide plenty of scope for moving to the country for a lifestyle the envy of many. Population centres such as Warragul, Wonthaggi, Sale, Bairnsdale and Orbost offer the benefits of larger townships with easy access to the coast and mountains that define the region’s southern and northern borders.

Traralgon sits at the heart of a Gippsland’s Teach For Australia community. The regional city has a population of nearly 26,000 and is the fastest growing city in the Latrobe Valley. The region’s transition from coal production will have significant effects on the area’s community so Associates and Alumni have the capacity to play a leading role in supporting the community and its young people through this period of change. 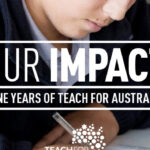 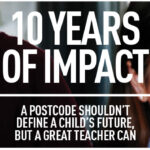